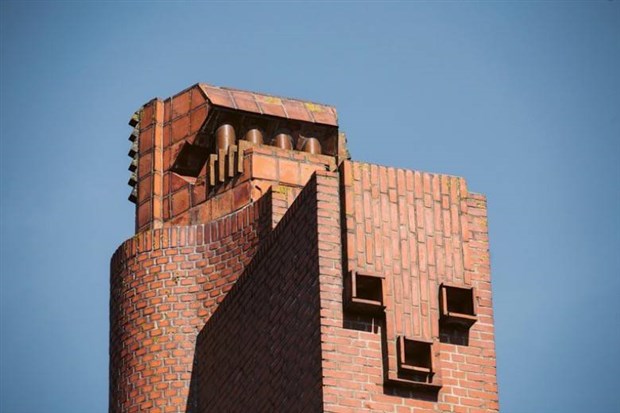 In a relatively short time span in the early 20th century (between 1910 and 1930), the so called ‘Amsterdam School’ of design and architecture showed the world a passionate synergy between artistic and social movements. The impulse of shaping and producing our living environment, both socially and physically, has changed the face of our cities as well as our daily life. The Amsterdam School stood for:

The synergy, the total sum of these movements is essential to the understanding of The Amsterdam School. The interaction of these movements was a manifestation of modernity by which it entered the international stage. It heralded everything new and progressive, after the romanticism of neo-styles at the end of the nineteenth century.

Amsterdam School Museum Het Schip is situated in an urban block, that was designed in 1917 by the well-known Dutch architect Michel de Klerk and that its inhabitants gave the nickname “The Ship. This urban block’s design concept caused a big stir on an international scale. It is now one of the Dutch government’s top 100 heritage sites and it has been proclaimed as one of the most significant 20th century buildings by the International Union of Architects. It is recognized as one of the best examples of Amsterdam School and Modern Expressionist architecture. From its urban layout to every detail it is a true Gesamtkunstwerk.

The Amsterdam School, in its design, architecture and social movement, was of defining importance in the modernization of The Netherlands: from the first social housing areas, utility buildings, offices and factories to consumer articles and objects of art. Its inspiration for many architects, designers, thinkers and politicians worldwide is undisputed.

It is presently well established that The Amsterdam School was a key movement by which Dutch architecture entered international modernity. It was rooted in the same influence of the architect Berlage’s rationalism as the other, simultaneous but opposite, Dutch international contribution to early 20th century architecture, “De Stijl”.

The catalogue of the 1975 Stedelijk Museum exhibition that led up to the re-appreciation of expressionist Amsterdam School architecture and design, describes the movement as: “The appearance of the Phantasy driven ones, open-mindedly playing with the treasures of rationalism”. This was a quote from the opening statement of the Amsterdam School periodical Wendingen in 1918 by its editor, the architect H.Th Wijdeveld, and this statement comes closest to a manifesto (quod non) of the movement. This attitude, revived in our memory by Wim de Wit (who until recently worked at the Getty Research Institute) is elaborated on in his 1983 Cooper-Hewitt Museum exhibition catalogue: “The Amsterdam School, Dutch Expressionist Architecture, 1915-1930”, in which he points at the common spiritual goals of the Amsterdam School and De Stijl, in contrast to the many other diverging aspects of the two movements.

In this sense the development of the unified urban block Het Schip – as opposed to an urban development consisting of repetitious single dwellings – must be considered an internationally significant Dutch landmark that provides insight into modernity, however not into “modernism”. The importance of the experiments in the confluence of architecture and urbanism in the Spaarndammerbuurt neighborhood in Amsterdam, of which Het Schip is a part, is underlined in Panerai, Castex and Depaule’s influential “Urban Forms: The Death and Life of the Urban Block” (English translation 2004). The theme of modernity and/or/versus modernism was put on the agenda of the national pavilions at the 2014 Venice Biennale of Architecture, curated by Rem Koolhaas, entitled “Absorbing Modernity 1914-2014”.