For years, it was clear that the goal for which Wendingen was established - to make an inventory of the Amsterdam School in all its diversity - was a great success. By the end of 2020, connoisseurs and enthusiasts had placed over 1700 objects, 260 biographies and almost 250 blogs on the platform. In doing so, we all helped put this exceptional art and architecture movement literally and figuratively on the map. But as the content grew, so did the technology. The now outdated website therefore recently underwent a major and much-needed transformation: a completely new website, with a new look that clearly refers to Hendrik Wijdeveld's innovative typography. (Here more about the transition to Wendingen 2.0 here).

We're not worried about the increase of new articles. Although it has become less of a hail Mary, we know that there are still plenty of gems to be found that deserve a place here as well. In addition, new exhibitions and books continue to appear, to which we will of course continue to pay attention. But we also have a wish list for the near future. However, we can use some financial support. To keep Wendingen going at all, but certainly also to improve it. A contribution - no matter how small - is therefore greatly appreciated. You can do that by making a donation (please mention Wendingen). Thank you very much! 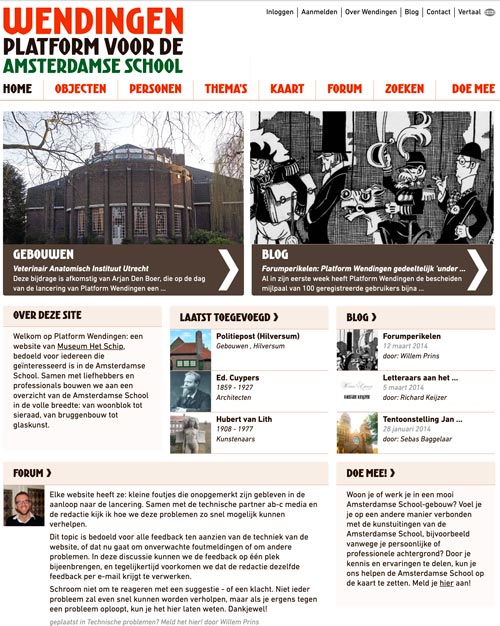 To make the website a success, the museum relies on the principle of crowd-sourcing: through the platform, connoisseurs and enthusiasts are asked to help make an inventory of the Amsterdam School in its full breadth - from housing block to jewellery and from bridge building to glass art. The editors invite everyone to describe objects from their (immediate) surroundings. The platform makes it easy for enthusiasts to get in touch with like-minded people and professionals from all over the Netherlands. For although the movement derives its name from the capital, examples of the Amsterdam School can be found in all provinces (and even abroad).

For the inventory, the platform cooperates as much as possible with other knowledge institutions and organisations and professionals in the field. Thanks to the efforts of archives, architecture centres, museums and private individuals, a large amount of sources and historical information about the Amsterdam School has already been collected and made available digitally. This information will also be made available through Platform Wendingen and linked to objects, persons and background stories. All Amsterdam School data in one place, that's the goal. Wendingen makes the connections between the various expressions of this influential art movement visible. For what do a villa park in Bergen, water towers in Groningen, textile and glass designs from Rotterdam and a studio house in Geulle in Limburg actually have in common?

Platform Wendingen was developed for Museum Het Schip by Willem Prins (Somtijd) and Wim Jacobs (independent architect and former board member of Museum Het Schip). This unique platform for the Amsterdam School could be realised thanks to the generous contributions of the SNS Reaal Fund and the VSB Fund, the City of Amsterdam and the support of the Amsterdam Federation of Housing Associations (AFWC).

The Amsterdam School was a notorious movement in art and architecture. It was a movement without a defined programme. In the magazine Wendingen - under the inspiring leadership of Hendrik Wijdeveld, whose typography can be called pioneering - the works and ideas of the individual Amsterdam School artists were collected and shared.

Now, 100 years later, we are looking for the soul, the expressions and the limits of this expressive movement. Museum Het Schip has set up Platform Wendingen for this purpose, named after the most important magazine of the Amsterdam School.

Read the extensive theme article by Wim Jacobs, board member of Museum Het Schip about the connection between Wendingen, the magazine and Wendingen, the online platform.

Digital version in colour of editions of Wendingen 1918-1931 can be found here.

View digital versions of all published Wendingen editions in black and white (with amongst others the editions on Frank Lloyd Wright).

A website of Museum Het Schip. The museum for the Amsterdamse School.