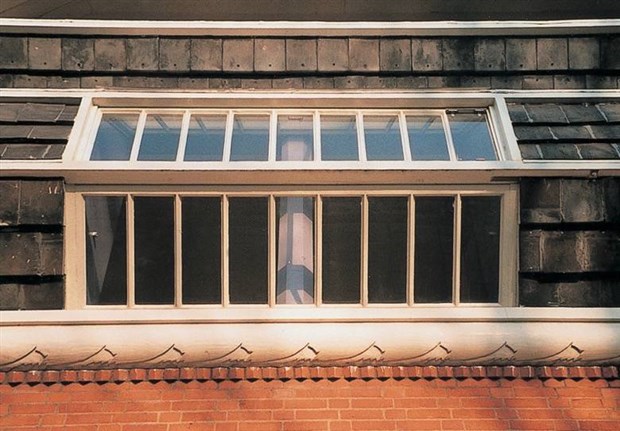 In 1916, the Belgium architect Hub. Hoste ‘congratulated’ Holland with the great honor that the Dutch architects of the Amsterdam School were the first to explore a new direction in architecture – surpassing France and England. Hoste’s understanding of the Amsterdam School as an expression of non-materialist idealism, stresses a spiritual striving similar to the members of the De Stijl movement, founded in 1917. De Stijl distinguished itself as an intellectual movement, defining itself in theoretical writings. According to De Stijl, the difference between the arts could be understood in terms of the unique qualities (or possibilities) of representation by each art. As opposed to De Stijl, the Amsterdam School distinguished itself as an anti-intellectual, intuitive movement, based on the notion that artistic creation springs from feeling instead of being based on ratio. Notwithstanding the lack of theoretical explanation, the Amsterdam School was unmistakably grounded in a strong sense of artistic awareness. Architecture, as Michel de Klerk stated in 1916, had to do no more than to return to its roots in art. It is to say that such artistic awareness can only exist when being firmly grounded in a notion of the nature of the arts.

This opens up the question as to the relation of the different disciplines in the design of the third building block (nicknamed Het Schip) by Michel de Klerk at the Spaarndammerplantsoen. More specifically it opens up the question to the meaning of autonomous detail and symbolic motives. Mainly there are two contemporary (1910s-1920s) readings of the work of De Klerk, a negative reading which makes mention of unhealthy, perverted use of ornament or detail, and a positive reading which stresses the new value of individualism and the effect of plasticity. It seems as if contemporary critics have conceived of the Amsterdam School architecture as a plastic art, but without the representational potential of sculpture. While stressing the great importance of detail in the works of De Klerk, no attention is directed to the meaning of autonomous detail or symbolic motives. A significant omission in contemporary (1910s-1920s) value-based criticisms is thus the direct meaning of ornament and detail. While in recent literature interpretations have been given of certain iconographic and abstract motives in the design of Het Schip, no attention has been paid to the meaning of representation in Amsterdam School thought. An understanding of the different representational meanings of the arts, could thus give insight into the Amsterdam School’s notion of the relationships between the arts, and contribute to the understanding of autonomous detail and symbolic motives in the work of De Klerk.